After two aborted flights - one at Porth Kidney Sands (not enough wind) and the other on St Ives Peninsula (too gusty) - I was wondering if I'd ever get the Raspberry Pi kite-mapping rig up in the air while I was in Cornwall. 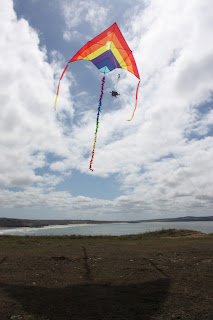 Fortunately our trip to Godrevy provided perfect conditions. Reasonably constant but not too gusty wind coming off the sea.  The initial test flight (without the Pi) looked great and so I soon had the whole system aloft. The cliff tops above the main beach area by the National Trust car parks were a perfect launch site and also provided a nice walking route. 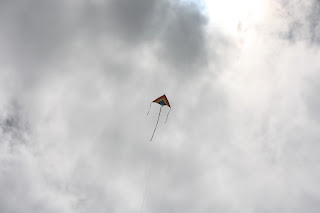 The line unspooled smoothly and using both the long tail and a streamer on each wing-tip, the kite was probably the most stable I've ever had it. 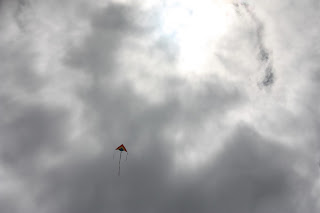 In fact I was soon running out of line - I always like to leave a good number of turns on the reel just in case.

I strolled around the cliffs, dragging the kite behind me. Actually it moved fairly easily and it was only when I started around the top of the point by the lighthouse that the crosswind started to kick in. I was hoping to find a vantage point where I could manoeuvre the kite over the lighthouse itself, but the angle just wouldn't allow it. The kite was starting to tug quite hard so I thought it wise to bring it back to ground. Note that my young apprentices have disappeared off to the beach at this point. 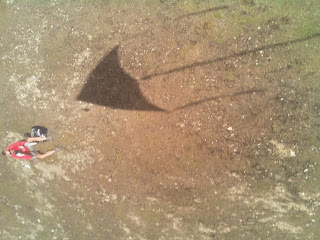 I didn't need to check the altitude reading to know that this was the highest I've ever flown the Raspberry Pi. It can sometimes be  a bit of a struggle to reel the kite back down but this time it was particularly tough and took over 15 minutes. My arms and shoulders were burning by the time I got down to the lst few metres and I was glad that I had my gloves on. Even then, one of them had a rip due the friction from the kite string. 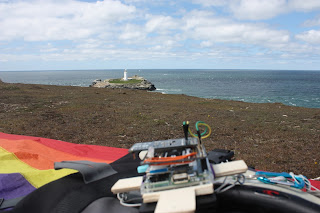 The entire flight lasted just over 50 minutes and I'd managed to capture 597 images. Obviously there were a lot of images that captured basically the same scene - plus loads of the descent. Having said that, I was still impressed by how much of the land I'd covered when I assembled the images using mapknitter (embedded version below).


Using the accelerometer from the Xtrinsic board definitely helps keep the number of spurious images down as the camera is activated only when the rig is in a relatively horizontal position. However, every now and again a strong gust will flip the rig so quickly that the camera does take a sideways-looking image. Although these are not any use for creating the final map, they are often quite nice views. 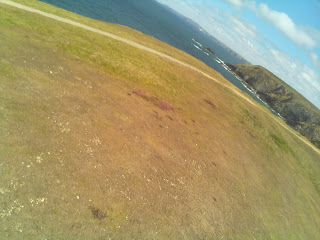 I even managed to snatch a quick snap of the lighthouse as the kite was getting close to the ground. 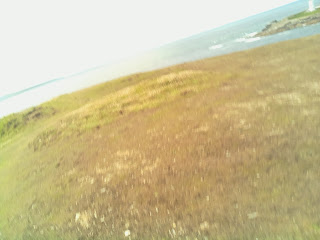 It makes me think about modifying my picavet so that it can be used to hold the Pi vertically to take some nice scenic shots instead. Something to consider for version 2.
Posted by topshed at 02:42