Pivarium: care for your reptiles with a Raspberry Pi

It's been a while since there’s been a new addition to the family and I’d forgotten how much preparation is involved. All the familiar concerns that I remembered from when the boys were born came flooding back: you need to make sure the new arrival is not too hot or cold, provide a safe environment that they can’t escape from, ensuring they’re safe at night...

Snakes, I've discovered, are a lot like children. Except easier to feed. 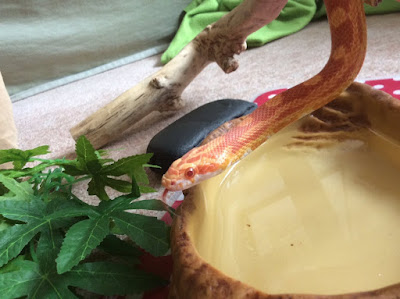 Anyway, faced with such challenges there is only one response: make some stuff to help.

Of course when the boys were born, the Maker community wasn’t as well established and, Raspberry Pi, the core of many IoT projects had yet to be born itself. So this project gave me an opportunity make up for it now.  The Pivarium deals with the the main requirements mentioned above.

Monitoring the environment inside the vivarium.

Snakes are ectotherms - they have no internal means of regulating metabolic function and maintaining homeostasis. In cold weather, snakes tend to be sluggish as their metabolisms slow down, whereas in warm weather they tend to eat more and move more quickly.  So in captivity they need to have a temperature gradient available so that they can move to a cooler place when they get too hot and vice versa. The Kernel’s vivarium has a  thermostatically controlled ceramic heat lamp at one end but I wanted to monitor the temperature under it,  as well as at the opposite end where there is more ventilation.
I opted for DS18B20 temperature sensors because they are cheap and reasonably water -and hopefully snake pee - resistant. I was too lazy to convert the ends of the leads to female jumper sockets so I just used screw terminals and a small breadboard. My excuse is that this will make it easier to replace a faulty sensor in future.


The humidity in the Pivarium is also important, especially when the snake is shedding its skin so I wanted to monitor that as well I opted for a DHT22 which can also record temperature as well and is more accurate than the cheaper DHT11.  Therefore I placed it in the centre of the vivarium, attached to the roof. This gives me a third temperature reading to provide a good overall idea of what the gradient is like in the vivarium.

While I was testing and The Kernel was settling in,  I used a Pi Touchscreen to display a dynamic plot of the temperature and humidity values in real time. This was produced using Jupyter Notebook and the Python Matplotlib library. 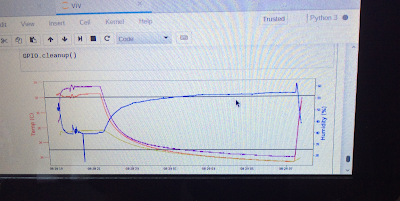 Once I was happy that everything was working and reasonably stable removed the touchscreen and swapped the Pi 2 for a Zero W. I still wanted to keep a graphical record of the environment though, so I created a data bucket on InitialState and upload regularly the data to produce a nice dashboard that I can check from anywhere that I can get on the InterWebs.


For a local display, I don’t really need graphs - just the headline readings are fine. I also didn’t want something bright and flashy like an LED matrix so I opted for the excellent Pimoroni InkyPhat. This is perfect as I only need to update the values every 5 minutes or so - things don’t change that rapidly in the Pivarium.  Although the InkyPhat is limited to three colours, that’s fine.  I want to easily see if a temperature is outside the desirable range for that area of the Vivarium, in which case the value is displayed in red text, otherwise black. I also display the time so I can tell that the readings are current and that the Pi or Inkyphat hasn’t stuck or crashed. 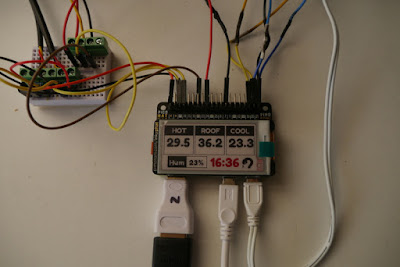 I want to easily see if a temperature is outside the desirable range for that area of the Vivarium, in which case the value is displayed in red text, otherwise black. I also display the time so I can tell that the readings are current and that the Pi or Inkyphat hasn’t stuck or crashed. 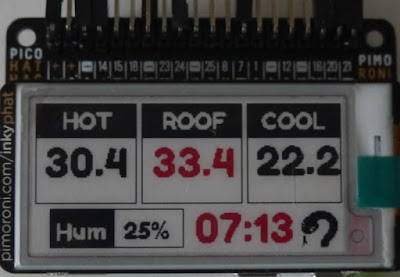 The next task was to see what The Kernel was getting up to at night. At a later stage I might put a camera in the vivarium itself, but for now I’m happy to have a second Pi outside with a Pi Noir camera and some IR LEDs, all mounted in a Lego frame.   Reflection from the vivarium glass in minimal and I can easily position the whole thing to focus on a particular area (e.g the hot or cold hide, the water bowl etc). I didn’t want to record all the time so I used Motion software to detect when activity was occurring and start recording then. 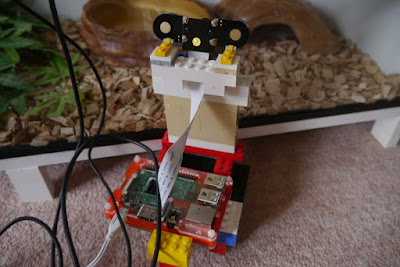 I’ve been able to capture some good footage of The Kernel’s nocturnal behaviour. My favourite so far has been this clip of him having a big drink and then burping.

The final task was to prevent The Kernel from unexpectedly leaving his lovely home. Corn snakes are renowned escape artists and will find a way out through any small crack or opening. A common escape route is cased by the sliding vivarium doors not being closed properly and the patient and surprisingly strong guest levering their way out when nobody is looking. A simple remedy is to always fit the sliding vivarium lock and mark its position on the bar so that you know the doors are fully closed. However it is really easy to forget this or to not lock the doors immediately and then forget to do it later (especially when removing snake poo). So  I wanted to add some blinkin LEDs to provide an immediate visual indication that doors were not secure.
I found some nice chunky contact switches (with a satisfying click). These have 3 spade-connector terminals, a different pair of which are connected together when the switch is closed or open.    I designed some 3D printable brackets to fit hold them and allow easy fixing to the side of the vivarium. I also added a hole and channel for a blinking LED.
I also 3D printed some handles to fit onto the existing glass squares that are used to slide the doors. These press against and close the contact switches: the advantage of 3D printing these was that I could precisely adjust the size so that the switch is only fully depressed when the door is completely closed.


You can see the complete Python code for the Pivarium here. The STL files for the various 3D printed files and the Jupyter Notebook file used in testing are also there.
Posted by topshed at 00:12